This week, as part of the Child Health Emergency Medicine Social Media Campaign, we are highlighting a Cochrane summary on emergency ultrasound-based algorithms for diagnosing blunt abdominal trauma. This review was selected for the TREKK Evidence Repository on multiple trauma.

Many people admitted to hospital after an injury have ‘blunt’ (not penetrating) damage to the abdomen. Doctors treating these patients need to know whether the organs within the abdomen have been injured. Ultrasound scans are believed to help diagnose the patient’s condition. In this review, the authors looked for studies that compared death rates in patients with an abdominal injury where ultrasound was used to aid diagnosis with death rates where no ultrasound was used. They also looked for evidence that ultrasound use could reduce the need to carry out other more complex and more expensive diagnostic tests. However, very few trials have been done and the authors concluded that there is insufficient evidence to justify the use of ultrasound as part of the diagnosis of patients with abdominal injury. Given this degree of uncertainty, it is probably justified to ask doctors on duty for a confirmatory computed tomography (CT) scan in patients who have sustained an injury with a high chance of major trauma (that is, head and brain injury, cervical spine fracture, thoraco-abdominal pelvic trauma, and other injuries).

The experimental evidence justifying FAST (Focused Assessment of Sonography for Trauma)-based clinical pathways in diagnosing patients with suspected abdominal or multiple blunt trauma remains poor. Because of strong heterogeneity between the trial results, the quantitative information provided by this review may only be used in an exploratory fashion. It is unlikely that FAST will ever be investigated by means of a confirmatory, large-scale randomised controlled trial (RCT) in the future. Thus, this Cochrane Review may be regarded as a review which provides the best available evidence for clinical practice guidelines and management recommendations. It can only be concluded from the few head-to-head studies that negative ultrasound (US) scans are likely to reduce the incidence of multi-detector computed tomography (MDCT) scans which, given the low sensitivity of FAST (or reliability of negative results), may adversely affect the diagnostic yield of the trauma survey. At best, US has no negative impact on mortality or morbidity. Assuming that major blunt abdominal or multiple trauma is associated with 15% mortality and a CT-based diagnostic work-up is considered the current standard of care, 874, 3495, or 21,838 patients are needed per intervention group to demonstrate non-inferiority of FAST to CT-based algorithms with non-inferiority margins of 5%, 2.5%, and 1%, power of 90%, and a type-I error alpha of 5%.

Today marks the start of Canadian Intensive Care Week. As part of the Child Health Emergency Medicine Social Media Campaign, we are highlighting a Cochrane summary on antifibrinolytic drugs for acute traumatic injury. This review was selected for the TREKK Evidence Repository on multiple trauma. 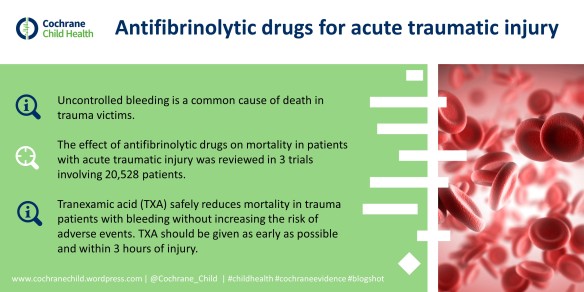 This is an update of an existing Cochrane review, the last version was published in 2012.

Injury is the second leading cause of death for people aged five to 45 years. Over four million people worldwide die of injuries every year, often because of extensive blood loss. Antifibrinolytic drugs promote blood clotting by preventing blood clots from breaking down. Some examples of antifibrinolytic drugs are aprotinin, tranexamic acid (TXA), epsilon-aminocaproic acid and aminomethylbenzoic acid. Doctors sometimes give these drugs to patients having surgery to prevent blood loss. These drugs might also stop blood loss in seriously injured patients and, as a result, save lives.

The authors of this review searched for randomised trials assessing the effects of antifibrinolytics in trauma patients.

The evidence in this review is current to January 2015.

We found three randomised trials which met inclusion criteria and included well data from over 20,000 patients recruited in 40 countries.

Of these, one small trial (n = 77) looked at the effect of aprotinin in patients aged 12 and older who had suffered trauma involving broken bones and shock.

Two trials assessed the effect of TXA in patients aged 16 and over. The largest (n = 20,211) involved patients suffering from a variety of types of trauma, and the other (n = 240) only those who had suffered traumatic brain injury.

The trial assessing the effect of aprotinin was too small to provide reliable data.

Results for TXA suggest that, when given early, TXA reduces the risk of death compared to patients who do not receive TXA without increasing the risk of side effects.

However, there is still some uncertainty about the effect of TXA in patients who have bleeding inside the brain from a head injury, but are not bleeding from injuries elsewhere. It is possible that the effects of TXA are different in this specific patient group.

We have found two ongoing trials that are trying to answer this question.

The authors of this review conclude that TXA can safely reduce death in trauma patients with bleeding and should be given as soon as possible after injury. However, they cannot conclude whether or not TXA is also effective in patients with traumatic brain injury with no other trauma, until the ongoing trials have been completed.

Quality of the evidence

TXA safely reduces mortality in trauma patients with bleeding without increasing the risk of adverse events. TXA should be given as early as possible and within three hours of injury, as further analysis of the CRASH-2 trial showed that treatment later than this is unlikely to be effective and may be harmful. Although there is some promising evidence for the effect of TXA in patients with TBI, substantial uncertainty remains.

Two ongoing trials being conducted in patients with isolated TBI should resolve these remaining uncertainties.